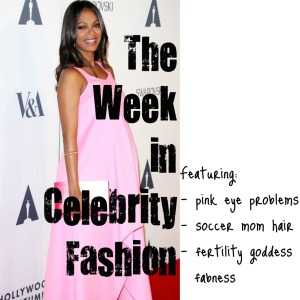 Everyone in Hollywood is a magical fertility goddess.

Red carpet maternity wear doesn’t get much better than this. She’s got the shiny hair and glowing skin of a fertility goddess, and a gown that’s chic, bright and fun, but more importantly, mildly comfortable. I don’t know if there’s something in the water in LA or what, but there’s something like twenty famous pregnant celebrities right now, with Blake Lively and Coco Rocha announcing their pending maternity most recently. I’m just going to pretend every woman of child-bearing age in Hollywood got together and said, “Okay, we’re all going to do this together, and that way the paparazzi will spend less time on each of us because there’s so many baby bumps to cover. AND we won’t feel like the fattest people on the red carpet. SOLIDARITY!”

It’s strange, watching Veronica Mars for the first time ten years after it debuted, because in my head, Kristen Bell is still an early twenty-something playing a teenager. So when I see her pregnant with her second child, my head explodes a little bit because I kind of forget that she’s actually a grown-up. But I digress. Anyway, this sleek, sexy, utterly simple gown is one of my favorite things she’s ever worn. She’s absolutely dazzling.

I don’t always buy what Vera Farmiga is selling, but I’m blown away by this impeccably beautiful gown. Hailee Steinfeld wore a similar version of this look a few months ago, and I’ve been in love with that combination of black lace, pink florals, and silver-white embroidery ever since. The purse is a bit on the basic bitch side for such a gorgeous gown, but it’s a small complaint. Overall, she’s killing it.

Taissa Farmiga hit the premiere of The Judge to support her big sister Vera (they’re twenty years apart, so if you thought this was Vera’s daughter like I did, you’re forgiven). Can we get a round of applause for a look this chic on a red carpet n00b? That pink-and-gold combination is just delightful, and I love the way the sandals pick up that metallic flavor without matching it perfectly.

I have been obsessed with this colorblocked, flower-embellished dress since it walked down the Fall 2014 runway back in March. (It was my red carpet prediction for Sandra Bullock.) Kudos to Hilary Swank for bringing it to life by keeping the styling simple and letting the dress do the talking.

I want to be her.

KIERNAN SHIPKA in Los Angeles
dress and shoes by Valentino

I don’t love the cut of this dress, and the Valentino “Rockstud” pumps were definitely the wrong choice for it. But whatever. I still want to be her.

Classic but glam. Love the shoes.

I find the purse distracting – it looks like it was left in an attic for the last thirty years and that’s why it’s such a mopey, faded yellow color – but everything else is working. The key print is a lot of fun.

I love a dress with some structure, but this is so structured that it looks like Leighton probably doesn’t plan on breathing or moving for the next several hours. Thumbs up for keeping things interesting, but she seems like she’s stuck in a straitjacket.

Adorable dress. But while I love the color and idea of the shoes, LORD do I hate those super-thick straps and the giant platforms. They’re just so unreasonably bulky, especially when paired with such a delicate dress.

The sleeve-strap things are downright stupid, and the soccer mom hair is atrocious, but it’s got potential.

DAKOTA FANNING in London
dress and shoes by Valentino

Once again, I’m not sure the “Rockstud” shoes are really working here. The studs next to the fringe? It’s just too much. Also, I feel like it’s been over a year since she’s even remotely changed her hairstyle. Dakota, you’re only young once. Live a little, and give up the platinum locks with black roots, the stick-straight center-part, or both.

I’ve never liked anything Julianne Hough has worn (or done, or said, for that matter), but there was a shot I could have liked this outfit. Until I saw the purse, and then all I could think of was this:

It’s not my taste, and I think the iridescent sparkly shoes with the iridescent sparkly dress is borderline insane. But we grade on a curve here, and with Lindsay’s past wardrobe malfunctions in mind, this is practically couture. This might be the first time I didn’t recoil in horror at her outfit in ages. And she out-dressed some of the most stylish women in Hollywood this week, so maybe her comeback isn’t impossible after all!

The hair hasn’t changed since the late 90s, the makeup is more clownish and bizarre than ever, and the outfit is completely forgettable.

Go home and stop infecting all of us with pink eye.

It breaks my heart that the bottom two spots in this recap are held by two of my favorite red carpet stars of all time. Diane, what the fuck has happened to you? Where has your innate stylishness gone? Did you really think this lingerie would read as a dress? Does Olivia Palermo know you stole her ugliest pair of tasseled sandals? Why are you joining the ranks of fashionista idiots who wear their jackets precariously balanced on their shoulders instead of ACTUALLY WEARING THEM LIKE NORMAL HUMAN BEINGS?!

I… I don’t even know what to do with this one, dear readers. Someone please tell Cate that she deserves better than this, because I’m too busy cowering in a corner, frozen with fear of the world’s ugliest blouse.