We live in a reboot culture where reality TV has become reality and anything dated by even a couple of years is worthy of a revival. With that in mind, it should be mandatory for the 2017 VMAs that every attendee wear an homage to a previous VMAs look.(If only because the rest of this post proves that no one attending this event has any fucking imagination anyway.) Thank the gawds for the cast of Rupaul’s Drag Race All Stars, who all (except Detox) donned VMAs looks of the past. I want to see how many of these references I can actually name without googling, so let’s play Name That Lewk!

I scored 6 out of 8 in Name That Lewk, and I am proud. Now, let’s move onto Beyoncé, people who came out of Beyoncé, and then all the vastly less interesting people at this event.

GODDESSES. I’m not even sure if I actually like what Bey is wearing, or if it’s irrelevant because she’s Beyoncé and she’s going to wear feathered wings that make her head look like it’s on stilts regardless of what we say. But I fully adore Blue Ivy’s entire ensemble, from the tiara to the FUCKING FABULOUS dress to the sneakers. I might as well just throw out my wedding dress and call my flower girl to let her know that this is our new wedding aesthetic.

Let’s just be real and say that the vulva-adjacent portion of this jumpsuit is a nightmare. 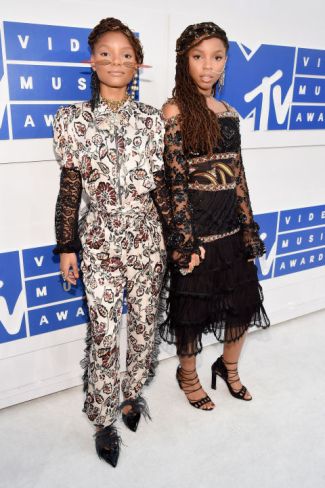 I’ve never heard their names before, but Chloe and Halle are very clearly the most interesting people attending this event. I may be too old to understand their face jewelry, but I’m not so old that I can’t recognize its coolness even while admitting I’m not cool enough to “get” it. And their clothes are straight-up fantastic. A fascinating girl can never go wrong in Rodarte. 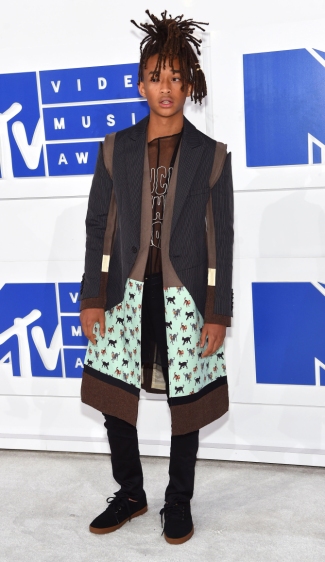 You can file this coat under “shit I don’t understand but I know I love.” It was really not that long ago that every man on every red carpet wore a black suit, unless he was like a member of the Red Hot Chili Peppers and then he’d occasionally wear a dress just to be “hilarious.” The fact that we live in a world where Jaden Smith dresses like this actually makes me happy, even if that comes with the burden of having to hear about Jaden Smith’s tweets. 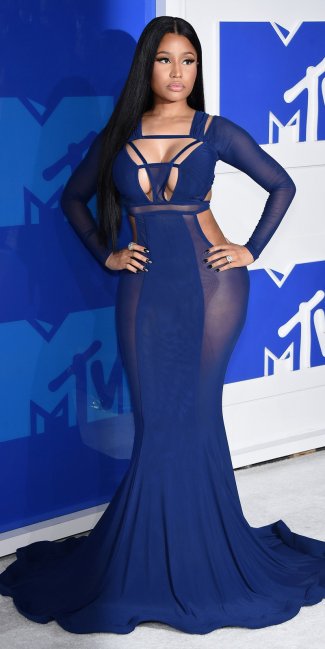 We’ve seen her in about a half-dozen different incarnations of this dress. And if you tried to count the number of celebrities in sheer side-cut-out gowns over the last two years, you’d approach infinity. I still think she looks basically flawless, but not in a way that gives me any kind of joy or excitement.

Again, I’ve seen this dress too many times to be blown away by it, but I can’t deny she’s fucking gorgeous in it. 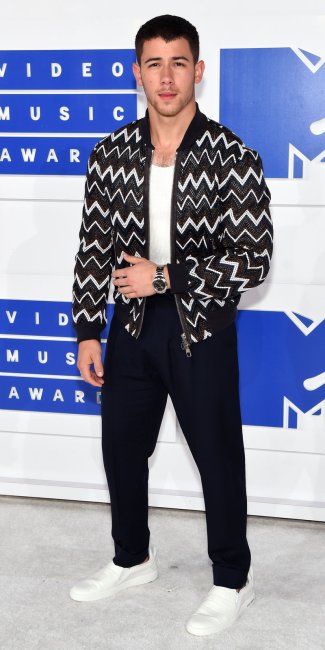 I love this jacket and would wear it every goddamn day.

Makeup-free Alicia is my favorite Alicia. I honestly had no idea how spectacularly beautiful she was until she stopped wearing makeup. (I knew she was gorgeous, but not like next-level other-worldly ethereal woodland nymph beautiful.) And she was smart to go with a boho-chic dress. There are some outfits that just look crazy if you don’t pair them with equivalently dramatic makeup. But a leaf-printed flowing maxidress is definitely the correct pairing for a bare, beautiful face. 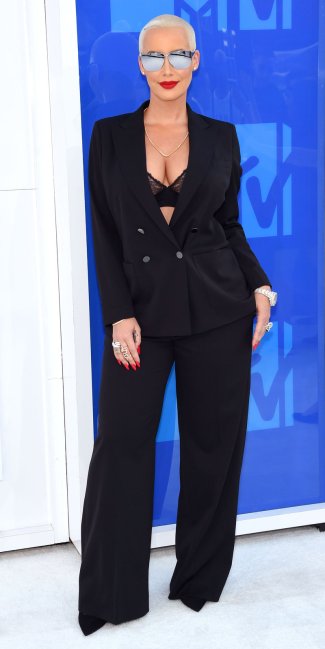 When did Amber Rose become the adult in the room? She looks downright elegant, but in a way that’s still youthful enough to be at the VMAs. Mazel tov, Amber.

I don’t know why this is happening, but I actually think this is weirdly chic. I know he’s wearing taupe overalls. But compared to the rest of the hot bullshit on this red carpet, I’m kind of okay with that! And I think the paint-splattered white denim jacket slung over his arm is cute and would also make Jon Bon Jovi proud. 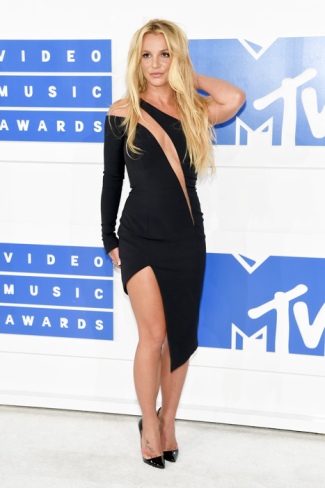 Some of you may not have been particularly cognizant about Britney’s shenanigans just under a decade ago, but I feel like all present-day opinions about Britney need to be filtered through the lens of 2007. What I mean by that is, yes, I’d probably write a paragraph of rage about this if anyone else were wearing it. But my standards for Britney are just, “does she look like she’s mentally healthy and safe?” And the answer is yes. Therefore, I have no complaints. 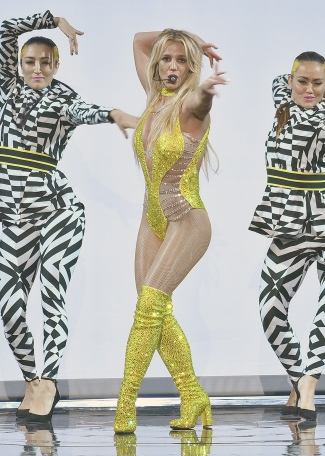 This is a straight-up awesome performance look. MTV might have fucked her over by making her perform after Beyoncé, but at least she looks like an explosion of Vegas fabulosity. Not an aesthetic I’d recommend for most, but for Britney, it’s perfect.

I’m not sure her aesthetic has changed even slightly in the last 15 years, but I don’t hate this dress as much as I do most of the garbage she wears. So that’s something.

If you squint, it looks like she’s being attacked by flesh-eating bacteria, so that’s kind of fun.

My mind is blown. Guys, did you know JOJO was still a thing?!

Also, I’d gladly die in a fire before wearing those pants, but she can almost pull them off. Almost. Maybe if she weren’t wearing a Mr. T bracelet over her sleeves.

She’s going to be embarrassed about this very soon. There is no child in the universe who could pull off this much STUFF. It’s too much look for any kid to pull off, with the possible exception of Blue Ivy and maybe Will Smith’s kids. Sorry, Q. I still love you!

HOLLAND RODEN
jumpsuit and cape by Kayat, shoes and purse by Stuart Weitzman

There’s a place on the red carpet for humorless intensity. It’s called front row at a Chanel show. The VMAs, in any iteration, in any generation, is the last place on earth I want to see your self-serious “look at my snobby alien wardrobe” bullshit. Also: I took a months-long blogging hiatus, and everyone is still wearing either sheer gowns or weird capes? That didn’t die yet? I guess the fashion industry needs me around to tell them to stop wearing stupid shit.

This might have worked five years ago, but now it just looks tired.

There is so much to say about exactly what makes this such a disaster – much of it involves the word “thirsty” and also some references to Rhythm Nation – but I think I can sum this whole thing up in five words: CERSEI LANNISTER WORE IT BETTER.

I have always loathed pretty much everything about Ariana Grande, though my biggest issues are with her complete and utter lack of elocution and her high ponytails. This just gives me so much more fuel for my fires of hatred. The bangs, the ombre ponytail, the peasant crop top, the world’s least flattering pants, the choker – I hate it all, my friends. I hate it all.