You knew this was coming. And I can’t say it better than this person, so I won’t bother trying:

RIHANNA HEARD THE THEME, DID HER HOMEWORK, STUDIED THE GUIDE, & THAT’S WHY SHE’S #1. SHE PAID HOMAGE TO REI THE WAY IT WAS INTENDED #MetGala pic.twitter.com/JmaVFuVQyN

This just in: VEILS. This one is just random enough to be absolutly fucking perfect. From the front, I liked the combo of the drapery and the boot, but I wasn’t truly sold until I saw the back:

THAT is some artful fucking draping, and such an incredible contrast from the front. Kudos, Lily.

This only thing Solange Knowles could have POSSIBLY worn to this event, and it is EVERYTHING.

I know she looks a little like a pirate, but this is very Comme de Garçons. The architectural shoulder piece sold it for me.

FLAWLESS. When in doubt, wear a giant bird. And that skirt goes on FOREVER:

You could fit forty more of her in there, like a Russian nesting doll. Actually, the print works for that too.

Left hands are SO last season.

Pharrell, ok. Helen, you are a QUEEN for committing this hard to an ACTUAL STRAITJACKET. This is the kind of crazy that is only acceptable here.

I couldn’t tell if a long trench coat was really bold enough for the theme, but Priyanka sold me with the close-up:

The curve of that collar and neckline did it for me. Combined with the earrings and that fucking impeccable makeup? Chills.

Love. Perfectly on-theme, and she’s the rare woman who can pull this off, since her style tends towards the crazy in general.

If he’s playing with proportions and dimensions, I applaud him. But I feel like he might just be wearing a child’s suit. Actually, that feels just weird enough to still work for this theme. So either way, well done!

This is classic Janelle, March Fabness 2017 champion and known queen of the red carpet universe, turned up to eleven. I am all about every detail of this, particularly when you see the entire skirt:

Miranda Kerr’s entire full-skirted dress fits in, like, a THIRD of Janelle’s skirt. THAT is a motherfucking BALL GOWN, my friends. 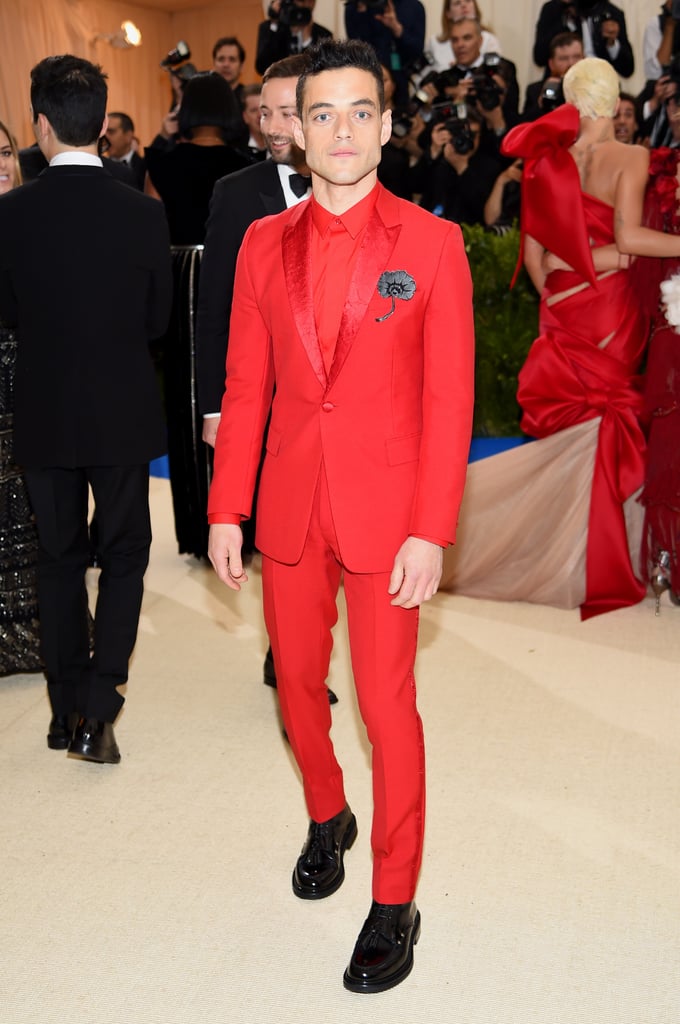 One of the only models who gave a flying fuck about the theme. Love the eyeliner, the hair, the stocking, and the hard/soft juxtaposition.

One of many women who sacrificed the use of her arms for the evening, at the altar of the Met Gala Theme Gods. Bless you, Hailee, for your gift. I hope someone held a cocktail with a straw in it next to you the whole night.

The hair sells it, and then some. This would have been too princessy if Lily were too afraid to go there with the styling. But the Girl, Interrupted hair is bringing it all together.

I was mostly confused by her cape and fluffy wings, but Zoë was another one that won me over with the contrast between the front and back of their lewks.

That shit is downright regal.

I don’t love the front, but the detailing on that skirt is more than enough for me. And the back is predictably gorgeous:

This one’s still got it.

Okay, it could be more on theme, but when 4 out of every 5 attendees ignore the theme entirely, I’ve got to praise something. And at least this looks like it could be worn to a Met Gala, if not this Met Gala.

It makes me nauseous when I scroll, which clearly means it’s a success.

The dress alone would have made me throw things at my laptop, but somehow, the Carrie Bradshaw-meets-Helena Bonham Carter situation happening on her head actually makes things work.

CASSIE and DIDDY
cape and tuxedo by Rick Owens, shoes by Christian Louboutin

Can we talk about how fucking awesome this outfit is? Even before Diddy decided to crown himself the king of the Met Gala by laying on the goddamn stairs, I was SOLD on this. The exploding pinstripes, the proportions, all fantastic. And then he started posing.

God bless you, Diddy. You are what the Met Gala needs.

Our 2017 Met Gala coverage is now complete! Come back soon for some Cannes Film Festival judgment.