Despite losing the Best Actress trophy to Glenn Close, Gaga was every bit the winner of the Golden Globes. In an homage to Judy Garland in A Star is Born, she served a platter full of glamour to a grateful nation. Also, those sleeves went on for MILES: 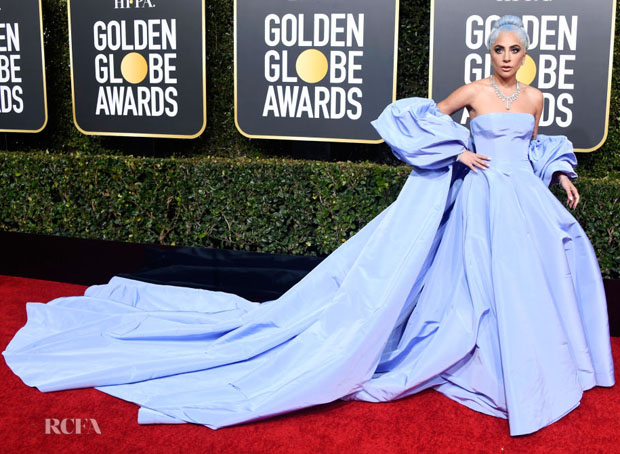 I want the entire cast of Crazy Rich Asians to marry me. And also maybe share their closets with me. I adored Gemma’s effortless beauty, the draping, the leg, the shoes – it may have gotten a tad wrinkled in the limo, but it works. And more importantly, it works from every angle:

Love the strap/bow combo on the back. Just so delicate and beautiful.

The size of the bow tie is borderline ridiculous, but I still think this is a fantastic look. And the purse is adorable.

He is a snack, and she is a goddess.

The fit is impeccable, and the color stood out on the red carpet. The styling could be turned up a couple of volumes, but I adore watching Mrs. Maisel starting to spread her celebrity fashion wings.

That dark emerald velvet is FLAWLESS on Taraji. I’m also loving the belt, the jewelry, and that “bow down to me, mere mortals” expression on her face. Look at this happy, happy British boy. I just want to run my hands through his positively Jean Ralphio-esque hair and make him sing to me and also let me borrow his jacket. (I am aware I have already laid claim to Darren Criss’s jacket, but you underestimate my need for ALL THE JACKETS.)

She turned it up a notch or two from her usual shtick. I like the glittery parts of the fabric, but that weird sheer texture is a little bit off-putting.

America’s Stepmom Laura Dern went for a classic color and a strange rouching pattern that looks way better on the skirt than it does on that sad little top.

It’s borderline saccharine, but I can’t be anything but charmed by Tahani in a Disney princess gown.

Like most of Michael Kors’ oeuvre, I find this inoffensive, but mostly uninteresting.

I’m nearly always buying the weird silhouettes that Julianne Moore and Givenchy are selling, but I really hate this. The top looks heavy, uncomfortable, and vaguely like a very poorly functioning straitjacket, and it ruins the lovely chainmail effective of that skirt.

Lose the ruffles and the seam in the middle of the skirt and this might actually be tolerable. But as is? Oof.

Would have loved to see this in a bright color.

I respect the hell out of the attempt, but this is a crisis.

Like Charlize, you can file this one under “very pretty and also I fell asleep before I could finish this sentence.”

The proportions are awful, and the styling is worse.