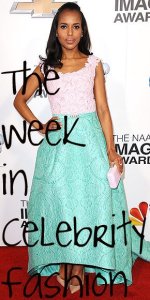 Awards season keeps on rolling, so let’s take some time to check in on the red carpet.

Kerry has been pulling out all the stops lately, and this stunningly unique Oscar de la Renta gown is no exception. The colors are phenomenal on her, I love the matching clutch, and the subtle shoes were a smart choice with all that color and texture going on. This silhouette is simply gorgeous on her – just another in a fairly long line of red carpet successes for Ms. Washington.

That is one exquisite little white dress. The lace and floral and beaded embellishments are all divine, and the slight ruffle to the skirt is just adorable. The sort of cape-like top is interesting and cool, and the makeup is terrific. I’d normally hate the shoes, but this dress has enough going on without a distracting pump, so I actually think the shoes matching her skin tone wasn’t a terrible idea.

One of the most heavenly little printed dresses I’ve ever laid eyes on. I love the geometric print on the skirt, the flattering band at the waist, the lacy floral top, and even the giant silver platforms, because they’re fun and they work with the little winter fairy vibe to this look.

Being 14, Elle can pull off straight center-parted hair better than most other starlets, and it suits the shape of her face particularly well. I’m obsessed with the pop of green eyeliner, perfectly balanced with rosy cheeks and pink lipstick. The pocketed, belted little white dress is beyond awesome (though maybe a size too big on her), and the disco-fabulous boots are simply to die for.

Kate Mara took a monochrome page out of little sister Rooney’s book and opted for a soft, chic LBD and freakin’ awesome shoes. Look at the swirls on those platforms – you wouldn’t know it from her face, but Kate has fun with her wardrobe, and I respect that. I don’t think the neckline/sleeves combo is particularly flattering, but the way that skirt drapes and curves is absolutely adorable. And I dig the purse too.

I’ve been seeing all those Warm Bodies previews not realizing that the star is a) Tony from Skins (the U.K. version, obviously, because it’s the only one worth watching) and b) he is also the kid from About a Boy. MIND = BLOWN, dear readers. And now we know this adorable Brit is also quite the sharp dresser! Keep it up, Tony.

Stunning color, lovely draping, hair like a mermaid. The accessories all seem a bit random, but it’s still a lovely look from Ms. Pinto.

ANNE HATHAWAY at the Directors’ Guild Awards
dress by Valentino, shoes by Casadei

This was my Fall 2012 couture red carpet prediction for Chloë Moretz, and I think I would have liked it better on her than on Anne. The dress is still adorable, but the shoes are a little dull and her spiked-up hair is starting to look ridiculous, like she’s some sort of celebrity chef instead of an A-list actress.

I’m not sure if I’m seeing her underwear or the dress, but fuck it – it’s a gorgeous little lace thing, and the purse is absolutely fabulous. This is pure after-party fierceness, even if the shoes are a little uninspired.

You all know I’m a sucker for Eddie Redmayne, but this is probably my least favorite of his looks so far. The pants look sort of baggy (though maybe that’s just in comparison to the super-skinny trousers he tends to wear), and I just hate this color so much. I know it’s not a denim suit, but it looks too much like one for my tastes, and I don’t think the shirt and shoes were particularly good choices either.

Amy, Amy, Amy. Always looking like the best-dressed office assistant in the corporation instead of like a star.

Jennifer, hire a new stylist. Your current one does not understand that a) you are so not the girl for tailored-yet-baggy jumpsuits with askew tits and b) no one should be that girl. That girl should not exist.

I would think it was pretty if I weren’t already asleep.

I get that it’s winter, but you’re in LA, Jessica. How many times in a row are you going to wear dark stockings on the red carpet? Leave that garbage for Zooey Deschanel, because the shoes are cute and the dress is adorable.

JAIME KING in Hollywood
jumpsuit and purse by Rachel Zoe

I swear, she ages ten years every time I see her. Today she’s a fifty-something former supermodel trying to subtly relive her Studio 54 days. But I do like the shoes.

The dress is okay, but it doesn’t really do much for her. The purse is a distraction, and the hair and makeup really need some help.

I don’t even know what this is. She looks like she’s in a body cast decorated with bits of a Victorian-era gown. I like the shoes, but not much else.

I like the shape and cut of the dress, but I don’t see a reason for that hot pink and red to be worn together in this manner. Also, the shoes are awful.

And Zooey destroys yet another perfectly nice Monique Lhuillier dress with black stockings and invisible black shoes. What the fuck else is new?

Need more of this week’s red carpet looks? Catch up on Part 1 and Part 2!

3 responses to The Week in Celebrity Fashion, Part 3