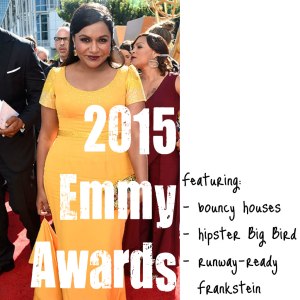 There’s so much more judgment to do, dear readers.

Mindy Kaling is amazing. And I swear, I had her as Best Dressed before I started listening to the audio version of her new book, where she talks about her wonderful costumer Salvador Pérez and how he always makes her look fucking fabulous. Well, Mindy, you’re right, and your dear friend Sal is clearly a genius. I can’t think of anyone better suited to wear this color, and I love the way the silhouette shows off her fantastic curves. I adore the sparkly sleeves, and even the personalized clutch, which could have been cheesy, but somehow feels appropriate. I just freaking love this woman.

This is just plain COOL. Apparently I’m a sucker for chain-link straps (see: my love for Taraji P. Henson’s Emmys gown), and I think the chain under her arm is particularly badass, like she’s some runway-ready Frankenstein with metal links and grommets literally holding her body together. But, like, in a cute way!

YES, YES, YES, SALLY DRAPER. YES. YOU WORK THAT EMMA WATSON COUTURE-PANTS-AT-FORMAL-EVENTS SHIT, AND YOU WORK IT HARD, BECAUSE YOU ARE EVERYTHING TO ME.

Holy SHIT, Ms. Janney. You are looking more ferociously stunning than ever before. This is the kind of dress you wear when you flat-out KNOW you’re taking home an award. I’d switch the cuff out for a smaller bracelet, but that’s virtually the only detail I would change about this. She is a queen.

Mazel tov, Jon! You finally got your long-deserved Emmy, and also you look amazing and I would like to lick this tuxedo off of you, if that’s biologically possible.

Our favorite ladies’ maid brought her natural sweetness and some sex appeal to her outfit. I love the unfinished hemline and the cut-outs, but I’m not sure I’m sold on the back:

Don’t get me wrong – I think those straps were a brilliant way to bring some hardness to an otherwise soft and feminine look. But if they don’t fit absolutely perfectly, they look like shit. And these DEFINITELY do not fit perfectly.

This kind of looks like Aubrey exchanged dresses and wigs with a 70-year-old actress, but you know what? I don’t care. I think she looks marvelous, if a bit older than her actual age. Plus, if it means she gets to chat with Lily Tomlin on the red carpet, it’s worth it. I’d wear a garbage bag with actual garbage in it if it meant I got to breathe the same garbage-smelling air as Lily Tomlin.

Viola Davis is a fucking superhero. Her show is not great, but she is a powerhouse and a half on it, and deserved the hell out of that Emmy. Her speech was as inspirational and strong as she is, and though her dress is a tad expected, I like the way the print bunches together over her stomach and then cascades down. It’s a flattering and lovely effect.

I think I can get behind the bodice, though it’s a bit “weird for weird’s sake” for me. But my God, what is happening around her legs? Is that a skirt, or a partially-inflated bouncy house?

Maybe I’m grumpy, or maybe I’m sick of dresses that wiggle around the straps and say, “voila! it’s something new!” Or maybe I just can’t believe Modern Family is still on the air. But even though this is pretty and dramatic, I just can’t give a shit about it.

I’m going to go ahead and assume that hair is for a role. Because if it’s not, that makes me very depressed, that Elisabeth doesn’t have someone in her life willing to say, “honey, that hair is the OPPOSITE of okay, and I’m kidnapping you and taking you to my colorist immediately.”

Sweet and pretty, if not particularly surprising. Also, is she wearing a ponytail? Gina, if you are wearing a PONYTAIL to the goddamn EMMYS, and you are anyone except Frances McDormand, I am going to need you to click here to be properly shamed.

Padma always wears an incredible color that absolutely glows on her. She also always wears a gown that only half of her breasts actually fit into. Cleavage is fine, but making me feel like I need to run up to you and yank your dress up an inch is not. That’s what personal assistants are for.

Boring, which is probably what Tina was going for. She was mostly there to give fun reaction shots and wear awesome glasses when she presented an award.

I really do love me some Christian Siriano, but this feels like a shitty rip-off of a Marchesa dress that is itself ripping off McQueen. I can’t get enthused about it.

Is Anna making that face because she just realized she’s covered in spiderwebs?

You have to love Amy Schumer for bringing a tiny electric fan onto the red carpet and refusing to put it down for photos. It WAS 100 fucking degrees on that red carpet, after all. It didn’t make her dress fit better or her hair any less insane, but it made me continue wanting to be her best friend.

Kathryn Hahn is hilarious and amazing, and deserves so much better than these tacked-together tablecloths masquerading as a dress.

It looks like she’s wearing this sideways, and the bottom is distractingly hideous. And things don’t exactly improve from other angles:

What the fuck is happening with that bell-bottomed skirt? Is she really wearing lemon-lime heels with a bright yellow dress? Does she think hipster Big Bird is an acceptable aesthetic to shoot for at the Emmys? I just have so many questions.

Get more Emmys: Catch up on Part 1, and wait with bated breath for Part 3!