This batch of Met Gala lewks is brought to you by the celebrities who tried, and almost succeeded!

Add six feet to the end of this train, and this would’ve been in my top five looks of the night. As is, it’s slightly too normal to place Ruth amongst those who really committed to the theme. But I love the high neck and the printed cape and the general vibe of this.

Love everything except the white shoes, but Julianne used to wear this kind of shit on a Tuesday to the goddamn 7-11. I expect more from a star this big, particularly one who isn’t afraid to take fashion risks.

I basically worship every man in Hollywood who wears anything other than a black tux to high-profile events.

Points for going for volume and silhouette with that skirt, but the styling is a little too low-key.

Wish she’d saved this one for a different event, and rid herself of those very upsetting shoes.

For the love of God, Nick, shave or grow an actual beard. This in-between middle-school pube-stache is just exhauting.

It’s a little sloppy and mostly looks like she got caught in some kind of toilet paper tornado, but props for trying. Now, Chrissy, please explain to your man that his penis won’t fall off if he dares to wear something more interesting than a white dinner jacket.

Something about her makeup creeps me out, and not in an on-theme way. I do like the single long glove, though.

I was ready to declare this a snoozefest, but I’ll give Laura some credit for the back:

Okay, so maybe she just tacked a polka-dot sheet onto her ass, but I’m not mad at it.

It’s a little princessy and a little dated, but she’s playing with proportions and silhouettes! Like she almost cares at least a tiny bit about the theme! Yay!

Hated this from the front, but it grew on me:

I kind of wish the bow had been SUPER gigantic, like the size of her entire body, but I guess we should be counting our lucky stars for a celebrity who cared like 5% about the theme, since there were so many who ignored it entirely.

The bleached brows feel VERY on-theme. The rest of this feels kind of scattered and lost.

I’m not entirely sure whether this is a gown, or a gown over pants, or why she appears to be wearing mules, but I’ll accept it. (Though the fiery red lipstick looks terrible with the magenta color in the dress.)

This has basically nothing to do with the theme, but this bitch is 64 years old and constantly serving high fashion realness, so she gets a thumbs up anyway.

I was all in for this dramatic skirt when I saw the gown from behind, but it honestly looks like Christian Siriano just forgot to finish the front of this dress. What’s even happening where the black fabric meets the pink? Are those lumpy, misshapen cut-outs intentional? I demand an explanation.

Okay, but what if the feathers just took over her entire body instead? See, making all of these almost-but-not-quite outfits into perfectly on-theme outfits is so easy, friends. Just take one detail and say, “but what if you blew that up to like 80 times its normal size,” and you’re done!

Katie Holmes is Ambien in human form, but I don’t hate this. At first glance, I thought it was indistinguishable from every other sweeping Zac Posen gown she’s ever worn, but I think the detailing here does deserve some props.

Not a fan of the fit or the hair, but I’ll accept some weird patchwork realness on this red carpet. Also, is it me, or are some of these celebs just rehashing the 2013 punk-themed Met Gala because they can’t figure out what to do with the 2017 theme?

If there’s any red carpet event in the world where you can get away with carrying your own hair as an accessory and pretending it’s FASHUN and totally not gross, it’s the Met Gala. However… this is still kinda gross.

Not great, but I didn’t expect Sansa Stark to have access to the highest of high fashions. Props to her hair and makeup artists, because she is absolutely glowing. 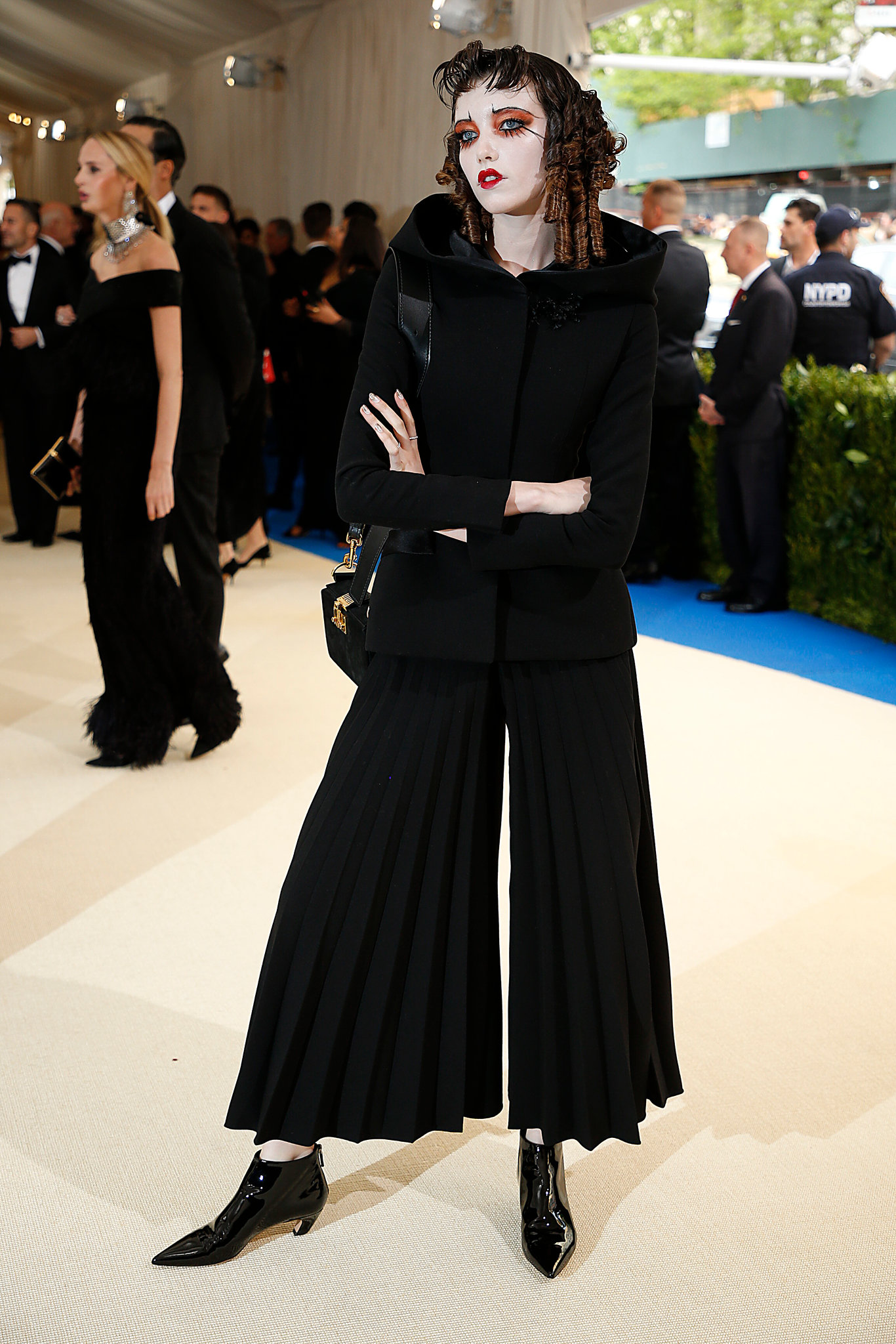 I don’t know why we’re pretending this is someone named Grace, when it’s clearly a time-traveling Helena Bonham Carter on Dia de los Muertos.

Lol, of COURSE Reese would add like an inch and a half of volume to one of her sleeves and be like, “LOOK! I DID IT! I AM SO AVANT-GARDE! I AM REI KAWAKUBO!”

Him too, with the little pube-goatee? Jonas Brothers, get your facial hair under control, please. Also, sorry honey, but you look like you own a Gatsby-themed quickie-wedding chapel in Vegas.