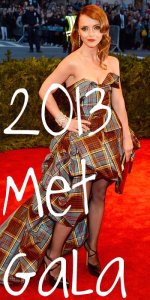 Your Met Gala coverage finally comes to a close, dear readers. Enjoy the Punk: Chaos to Couture while it lasts!

SO FUCKING FABULOUS. This is exactly what I would have worn to the Met Gala, had my invitation not inexplicably gotten lost in the mail YET AGAIN. It’s Vivienne Westwood, whose work made up a significant part of the Costume Institute’s Punk: Chaos to Couture exhibit that this night is all about. And it’s a goddamn work of art. I loved the stockings and the stunningly sexy shoes. The jewelry could have been a little more punk and a little less glam, but the dress is so on-point, I can’t bring myself to care.

That jacket is flawless. FLAWLESS, dear readers. Like all the best dressed starlets at the event, she committed to this look. The earrings are awesome, and the spiked headband is fucking out of this world. Also, hey, Matt Morrison in the background! We see you!

This dress is magnificent on her. I wanted to dislike it for being so low-key, but there’s something so dramatic and divalicious about keeping your entire look perfectly simple and chic in all black, but throwing on one giant, fabulous safety pin on as your nod to the theme.

Love the gown, even if you have to look like Miranda Kerr to pull it off. The spiked purse is fun, and the lipstick is delicious. Though Miranda’s street style is virtually flawless, she usually isn’t this strong on the red carpet, so props to her.

Had more people been bold enough to wear shit like this, the Met Gala would have been the most fucking unstoppable red carpet in the history of the universe.

I’ve seen this dress before, and though it’s interesting to look at and that beaded print is exquisite, that very flirty skirt feels all wrong for the event, as do the shoes and the hair.

You can always count on Florence to show up with wings made of six-foot long tassels. God bless her.

You can dye your hair a stupid color all you want, but if everything below the neck looks fucking Victorian, you’re not punk, you just don’t make much sense at all. Snaps for the earrings, but this hair was one of the only “daring” things that I thought just completed faltered on the red carpet. Had her outfit had anything to do with the hair, she might have pulled it off.

The dress and shoes are very cool, but relatively simple. This look also cries out desperately for more jewelry. But let’s get a close-up at that makeup:

Phenomenal. By far the best part of the look.

Michelle would wear everything except the spiked headband to any other red carpet event. That naturally makes it way, WAY too lame for the Met Gala and its theme. The dress and shoes are already depressingly ordinary, but the lack of jewelry is downright shameful.

It’s not punk, but it’s also not like anything I’ve ever seen Amanda in before, and the print is actually really astonishing and hard to look aware from. I wish she’d had more fun with the theme, but at least she looks interesting and beautiful.

Again, everything from the neck down, she could rock at any other red carpet event. Why waste the magic that is the Met Gala on something so basic? And though the pink eye shadow makes her look a little sickly in this photo, it was actually gorgeous in close-up:

It’s fabulous, that shock of pink, but it only works up close. The sloppy faux-hawk is kind of fun, and the earrings are to die for. Had she committed to the look anywhere else, she could have really knocked this one out of the park.

I think the dress itself is awkward and hideously unflattering and strangely boxy. Solange and her fabulous hair make anything look cool, but between that cartoon-looking dress and the decidedly not-punk accessories, she too looks like she’s better suited for a totally different event.

So, you just didn’t get the punk memo at all?

Come on, Lena. The hair and makeup are fabulous, but it’s the one time when you should be having as much fun as possible on the red carpet, and you’re in this serious, romantic gown? It just doesn’t make sense to me.

I actually hate every single thing about this look, from the terrifying, gravity-defying hair to the extremely tacky bright green jewelry to the boxy, awkward gown to those weird little elf shoes.

I guess it’s no surprise that Tory Burch + Jessica Alba does not equal punk.

I think this gown is kind of ugly and not at all right for the theme, and I’m afraid she’s going to fall the fuck over because of the weight of those earrings.

BOOOOOOOOOO. If there was ever NOT a time for a simple red gown, it’s now. The fit in the bust is too atrocious for words, and the clown makeup is only making things worse.

SEERSUCKER? AT THE MET GALA? AT THE PUNK-THEMED MET GALA?! I’m going to have a fucking stroke.