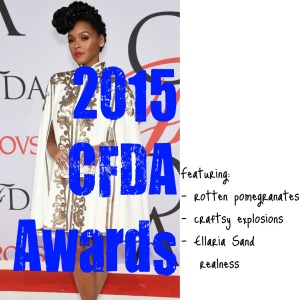 Be still, my heart. Janelle brought it 1000%, and she is giving me all the Ellaria Sand from Game of Thrones caped realness I could ever want.

It is impossible to go wrong when you combine Diane Kruger, Prabal Gurung, and a major fashion industry event. Always a recipe for jaw-dropping fabness.

One more embellishment and she’d look like a craft store explosion, but this manages to just barely stay on this side of fabulous. It helps that the makeup is impeccable. Amanda Seyfried is TOO goddamn beautiful.

As tall, thin, and art-deco-fabulous as the mother-fucking Chrysler building.

The dress is actually not that remarkable, but I forgot that for awhile because Cookie is selling the ever-loving SHIT out of it.

Love the wintery pale gray of the dress juxtaposed with the dark lipstick. Also: pockets in a gown! A favorite of practical bitches everywhere.

The styling is only okay, but the gown is damn near perfect for her. I can’t even comprehend how long her legs look. They may actually be infinite.

It could use a touch more polish in the fit of the top and the styling, but it’s fun and exuberant and Juliette Lewis just always looks like she’s having a great time while laughing at everyone around her. It’s extremely endaring.

I know I should hate this, because those pants are a yo, ho, ho and a bottle of rum away from being a pirate costume, but she really brought this look together with the styling. The casually twisted knot of the bodice is sexy as hell, and the necklace brings a touch of rocker chic flair.

A fantastic color (though Cookie wore it better). Cut-outs might be overdone, but at least these are a little bit interesting.

Not the most memorable dress, but a quietly gorgeous look.

At such an industry-insider event, Brittany is a bit out-ranked in terms of red carpet slay-ability. Maybe that’s why she kind of seems like she’s playing dress-up someone else’s clothes.

Necklines will get lower and slits will get higher, until one day, they meet in the middle, and the red carpet will finally become the nudist colony it has always longed to be.

Make that six thousand and one.

I hate her hair so much, it actually hurts.

Katharine McPhee’s definition of “nerd chic” is apparently a sleeveless labcoat, boring clothes, and Harry Potter glasses. I do not approve.

My eternal reaction to everything Katie Holmes wears:

Do they ever wear anything else? Also, Kayne’s slippers look cozy.

ASHLEY OLSEN and MARY-KATE OLSEN
ensembles by The Row, shoes by Chanel

Does anyone have a spare sense of humor lying around? These two look like they could really use one.

I would rather have my eyes gouged out slowly with a spoon than look upon this travesty for another moment. GOOD DAY.

One response to 2015 CFDA Fashion Awards